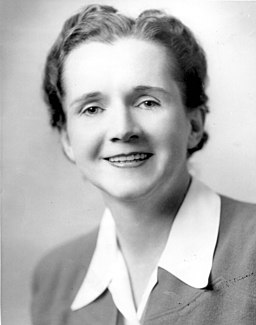 Rachel Carson was born in Pennsylvania, where she explored her family's 65 acre farm as a child. She attended Pennsylvania College for Women, studying English and Biology. She earned a scholarship from Johns Hopkins University to continue graduate level study in biology in 1929. She began working for the U.S. Bureau of Fisheries in 1935, while simultaneously writing on conservation and nature. Her writings were published regularly in the Baltimore Sun.

Carson was quickly promoted as junior aquatic biologist, and her work during World War II included researching undersea sounds to assist the Navy in submarine detection. She published her first book in 1941, and was promoted again to aquatic biologist in 1943. In this role, she created many resources for public distribution, and her writing skills prompted a move to the Fish and Wildlife Services publishing division, eventually becoming editor in chief of this division. She left the bureau in 1952 to focus on writing.

Carson's writings often focused on conservation and ecology, and her most well known book, Silent Spring, was published in 1962. This book "awakened society to a responsibility to other forms of life. In it, Carson documents in minute biological detail the true menace to the ecosystem caused by harmful pesticides."  Carson ended up testifying in front of a congressional committee, leading to the banning of DDT pesticides in the United States. She is often credited for launching the environmental movement.