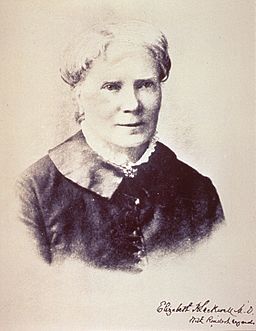 Elizabeth Blackwell, physician, obstetrician and gynocologist, was the first woman to obtain an M.D. degree from an American institution. Born in Bristol, England, Blackwell's family emigrated to the United States when Elizabeth was 11 year old to support the abolitionist movement. She initially went into teaching but felt called into medicine after a dying friend observed that she would have been spared suffering if she'd been treated by a woman. Blackwell was admitted to Geneva Medical School in 1847, and graduated two years later with her M.D. She went on to study midwifery in France, and returned to New York in 1851 to open a practice. Though she initially struggled, in 1854 she opened her own dispensary, and was joined in practice by her sister, Dr. Emily Blackwell soon after. Together with a third female doctor, Dr. Marie Sakrzewska, they opened New York Infirmary for Women and Children in 1857, a medical college for women that also provided care and treatment for the poor.